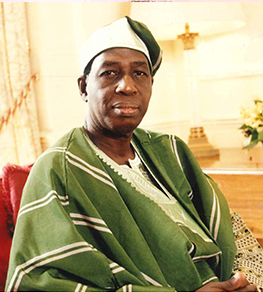 Dr. Gabisiu Ayodele Williams was born in Lagos on September 11, 1937. He was educated at the Methodist Boys’ High School, Lagos and later proceeded to England to study Medicine at St. Mary’s Hospital Medical School, London where he graduated in 1963. He did his post-graduate work at the Johns Hopkins University School of Hygiene and Public Health, Baltimore, MD, USA.

Dr. Williams held a number of important public appointments, including, among others, Medical Officer of Health, Lagos Chief Health Officer, Lagos State Government and Director, Disease Control and International Health at the Federal Ministry of Health. He also taught public health at the Universities of Lagos and Ibadan.

Dr. Williams has represented Nigeria at International Meetings and Conferences, including the Executive Boards of WHO and UNICEF. He was for two years Chairman of UNDP/WORLD BANK/WHO Special Programme of Research and Training on Tropical Diseases. He has published articles in medical books and journals. He is the author of the highly successful health information book for lay persons House Doctor (Health and Medical Problems Explained) and The Health of the Executive (Executives’ Health Problems Explained). Both books are published by Academy Press (West African Book Publishers Ltd).

Dr. Williams is fellow of the Economic Development Institute of the World Bank. He retired voluntarily from the public service in October 1993. For a brief period after his retirement, Dr. Williams held the position of Chairman of the Medical and Dental Council of Nigeria.

In 2007, Dr Williams began exhibiting short-term memory loss, which manifested in myriad ways, for example, repeating questions and the content of recent conversations and struggling to complete his third public health book for general public consumption. In 2008, while vacationing in New York, Dr Williams was diagnosed with Alzheimer’s disease at the Neurological Institute of New York, Columbia University, where his son currently works. Over the last 10 years, he has progressed through each stage of the disease with the support of his wife and principal caregiver, Dr (Mrs) Abisola Williams, and his four children, Olatoun, Mopelola, Olajide, and Olatunde. Today, Dr Williams is in the late stages of Alzheimer’s disease. Recognizing the paucity of resources for Alzheimer’s disease in Nigeria, and the challenges related to providing continuous physical, social, emotional, and medical care, the Gabi Williams Alzheimer’s Foundation was created to help mitigate these challenges and bridge the gaps in services and resources for caregivers.

He is married with four devoted children and six grandchildren.