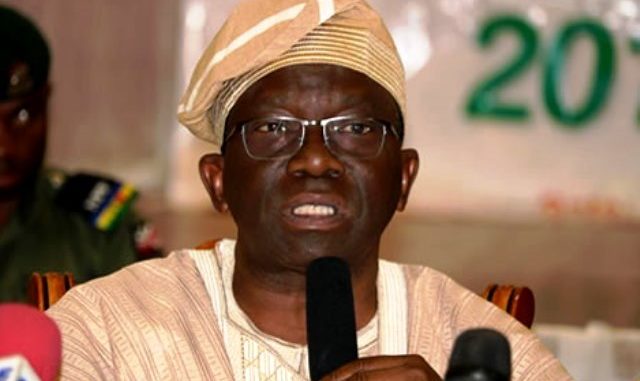 On behalf of the Hon. Minister of Health, Prof. Isaac Folorunsho Adewole, the entire staff of the Federal Ministry Of Health (the Public Health Dept. in particular), let me express our sincere appreciation to the organizers of this event for inviting us to this August event, ‘the inauguration/launching of the GWAF of Nigeria’.

We congratulate Dr. Gabi Williams & the family on the occasion of his 80th birthday celebration and the inauguration of this Foundation.
****On a personal level, as a Consultant Public Health Physician, I am particularly glad to be here and grateful for the privilege. In addition to professional knowledge, my mother is 91years old; so I know firsthand what goes into her care. It is music to my ears when she sees me and says,” you look smart”. I dare say if you are looking for volunteers for the Foundation, you have your first (I hope) right here!
The Hon. Minister of Health would have me convey his best wishes to Dr. Gabi Williams and the entire family and express his delight at having been made the Guest of Honor at today’s event.
He would have liked to be here himself, but he is unavoidably absent due to the exigencies of duty and has directed that I represent him and deliver the speech as follows:

At the outset, let me express my delight and appreciation for the honor of having being invited as the guest of honor at this event – “the inauguration/launching of the Gabi Williams Alzheimer’s Disease (GWAF) Foundation of Nigeria”.

Allow me to welcome you all to this very important event which I believe marks a turning point in public health history in general and specifically in the management of Dementias in Nigeria.
The details of the causes, prevention, treatment/management of dementia and the related challenges I believe will be dealt with in-depth by the organizers.
Suffice it to say however, that the challenges of managing Dementias & Alzheimer’s disease make it (Alzheimer’s) a potent public health threat. And here is why:

Improvements in health care in the past century have contributed to people living longer and healthier lives. This has also resulted in an increase in the number of people with non-communicable diseases, including dementia.
Although dementia mainly affects older people, it is NOT a normal part of ageing. Dementia is a syndrome, usually of a chronic or progressive nature, caused by a variety of brain illnesses that affect memory, thinking, behavior and ability to perform everyday activities.
Dementia is particularly challenging because it is overwhelming not only for the people who have it, but also for their caregivers and families. It is one of the major causes of disability and dependency among older people worldwide.
Alzheimer’s disease (AD) is the most common form of dementia, accounting for over 70% of dementia cases.

There are no available treatments that stop or reverse the progression of the disease, which worsens as it progresses, and can eventually lead to death.

In 2008, the World Health Organization (WHO) declared dementia as a priority condition through the Mental Health Gap Action Program.

Prevalence and incidence projections indicate that the number of people with dementia will continue to grow, particularly among the oldest old, and countries in demographic transition will experience the greatest growth.

Alzheimer’s disease (AD) has become an emerging major public health concern as the world’s population ages. It is noteworthy that with respect to global ageing trends, it is projected that by 2050, people aged 60 years and over will account for 22% of the world’s population with four-fifths living in Asia, Latin America or Africa.
Nigeria is not left out of the global trends. The incidence of Alzheimer’s disease is growing as our population ages.

The fact is that Scientists do not yet fully understand what causes Alzheimer’s disease. There probably is not one single cause, but several (risk) factors that affect each person differently – this underscores the need for research.

According to the World Health Organization, treating and caring for people with dementia currently costs the world more than US$ 604 billion per year. This includes the cost of providing health and social care as well as the reduction or loss of income of people with dementia and their caregivers.

In high-income countries, informal care (45%) and formal social care (40%) account for the majority of costs, while the proportionate contribution of direct medical costs (15%) is much lower.
In low-income and lower-middle-income countries (like in Africa) direct social care costs are small, and informal care costs (i.e. unpaid care provided by the family) predominate.
Currently, the vast majority of individuals living with Alzheimer’s disease are cared for at home by family members.
Caregiving can have positive aspects for the caregiver as well as the person being cared for. It may bring personal fulfillment to the caregiver, such as satisfaction from helping a family member or friend, and lead to the development of new skills and improved family relationships.
Although most people willingly provide care to their loved ones and friends, caring for a person with Alzheimer’s disease at home is a difficult task and can become overwhelming at times. Each day brings new challenges as the caregiver copes with changing levels of ability and new patterns of behavior. As the disease gets worse, people living with Alzheimer’s disease often need more intensive care.
Changing population demographics in many low-and middle-income countries (LMIC) may lead to a decline in the ready availability of extended family members in the coming decades

There are currently no specific markers that can confirm with a 100% certainty Alzheimer’s disease diagnosis. A combination of brain imaging and clinical assessment checking for signs of memory impairment is used to identify patients with Alzheimer’s disease.

Definitive diagnosis can only be obtained after patients’ autopsy by examining brain tissues.
There is a clear need for tangible advances in the area of biomarkers for assessment of risk, diagnosis and monitoring disease progression. Screening of patients still remains very expensive and new research is necessary to develop non expensive and reliable tests.

Clearly, continuing efforts are still required. This includes developing medicines that would slow progression, halt, or prevent Alzheimer’s disease and other dementias from occurring.
Currently studies are underway to identify biomarkers for diagnosis and new therapeutics to prevent or slow down disease progression.
The GWAF & partners will need to act in this direction and contribute to strengthen the Federal Ministry of Health leadership and Alzheimer’s disease research.

In consideration of the foregoing, the Gabi Williams Alzheimer’s Foundation could not have come at a better time! Their mission and objectives seek to address all the challenges & issues highlighted here & more.

The contributions of Dr. Gabi Williams to public health in Nigeria at Federal & State levels span several decades and continue to make significant impact.
Specifically at the FMOH, Dr. Gabi Williams was Director Disease Control & International Health from 1987 to 1993.
He set up the Environmental & Occupational Health Division in 1974 and became pioneer Consultant/Head of the Division & the Occupational Health Clinic.
Suffice it to say that Dr. Gabi Williams’ contributions to public service and his role as a pioneer of public health in Nigeria have already laid a solid foundation for the work to be done by GWAF! A building can only be as strong as it’s foundation. This is strong foundation and a huge legacy.
The FMOH is committed to collaborating with GWAF to provide necessary partnership & leadership in achieving the laudable objectives of the Foundation.
Health provision is challenging due to the resources required as well as various social, cultural, political & economic conditions/factors. This is more so with Alzheimer’s.
We need data to plan, personnel need to be trained.
The factors that determine health – (the socioeconomic determinants of health) lie outside the health sector, hence the need for multi-stakeholder involvement in tackling health issues and Alzheimer’s is no exception.
While wishing the Organizers a successful launch today, I am convinced that GWAF will not only fly but soar given the caliber of guests here present.

Once again, congratulations to Dr. Gabi Williams and the family.

WHAT IS ALZHEIMER'S DISEASE?